By Dick James, Senior Technology Analyst, Chipworks
Today (April 10) is the day that the Apple Watch becomes available for order, and of course we will be buying some to see what’s inside. We won’t be going for the gold Edition model, even so some of us here would like to; the Sport version should be quite good enough.
At the Apple event back on March 9 it was almost a case of last and least for the Apple Watch, after listening through the ResearchKit and new MacBook launches, and more Apple Pay demos. The Watch presentation was almost a case of déjà vu, since we got most of the details last year in the announcement last September.
The one new technical detail that I did pick up on was that the use of WiFi was confirmed – there was no mention of that last year (time 74.00 in the March 9 video). There was also much emphasis on the ability to use Apple Pay and make calls through the Watch, so we know that there are microphones in there, and it has NFC (near-field communications) capability, but we knew that after the initial launch last year.
The WiFi news was interesting to us, since we did a pseudo-teardown back then, based on Apple’s promo video, and we came to the conclusion that the Broadcom BCM4334 was in the Watch. But no mention of WiFi – what gives? I guess they just forgot, and even in the new launch it was just a passing reference.
We identified the BCM4334 from a layout image of the board inside the Watch that we took from a screen capture of the video, and the characteristic footprint of a flip-chip component. 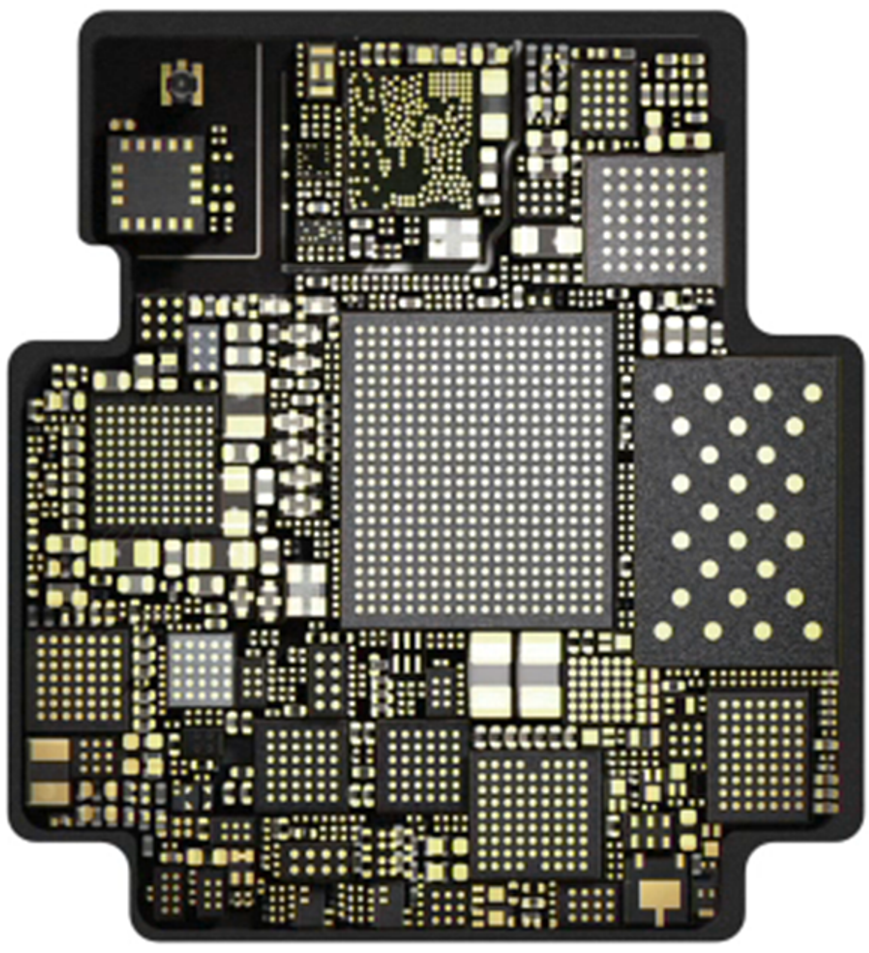 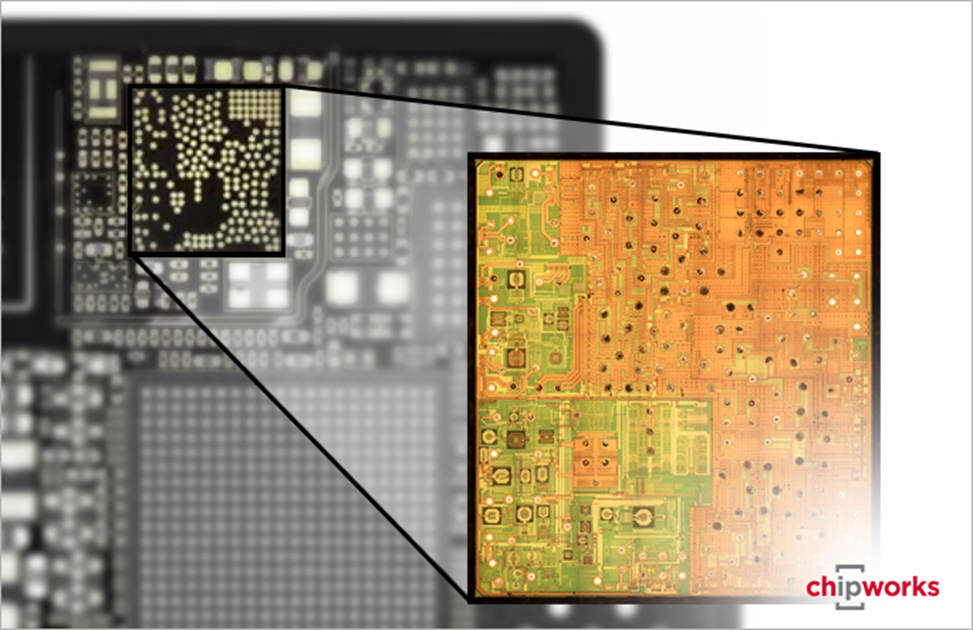 According to Broadcom, “The BCM4334 is a single-chip dual-band combo device supporting 802.11n, bluetooth 4.0+HS & FM receiver. It provides a complete wireless connectivity system with ultra-low power consumption for mass market smartphone devices. Using advanced design techniques and 40nm process technology to reduce active and idle power, the BCM4334 is designed to address the needs of highly mobile devices that require minimal power consumption and compact size while delivering dual-band Wi-Fi connectivity.”
So we have WiFi confirmed! In the meantime we’ve been looking at that board a little more, and we have also confirmed that the NFC and NFC booster chips used in the iPhone 6 and 6 Plus are also present.
Again, we looked at the footprints on the board – nothing quite as characteristic as the Broadcom chip, but knowing the size of the chip package and the solder ball array density gives us a good clue. And knowing the size of the BCM4334, we can work out the sizes of the other chips on the board.
In the iPhone 6 the NFC controller was a NXP 65V10, which contained the PN548 die, and an AMS AS3923 NFC power booster; so it’s at least a possibility that Apple will be using them in the Watch.
Below is the AS3923 from the iPhone, showing the 5 x 4 solder ball grid on the bottom of the part. Like the Broadcom chip, it is also a flip-chip-on-board (FCOB), so the die size will be characteristic, and while a 5 x 4 grid is certainly not unique, the combination of the two gives us reasonable confidence that a matching footprint on the Watch board indicates the presence of an AS3923.
Similarly with the NXP 65V10:
Here we have a 7 x 7 array, but it and the die size coincide with a footprint on the PCB.
Lastly, a business contact pointed out that the motion sensing is likely done by the same Invensense sensor that was used in the iPhones, the MP67B (probably the MPU6700), and when we looked, again the size and solder pads match. We wrote about this after the iPhone analysis,and in its lowest power mode, it can draw less than 10 µA.

Putting these three together, we see below: 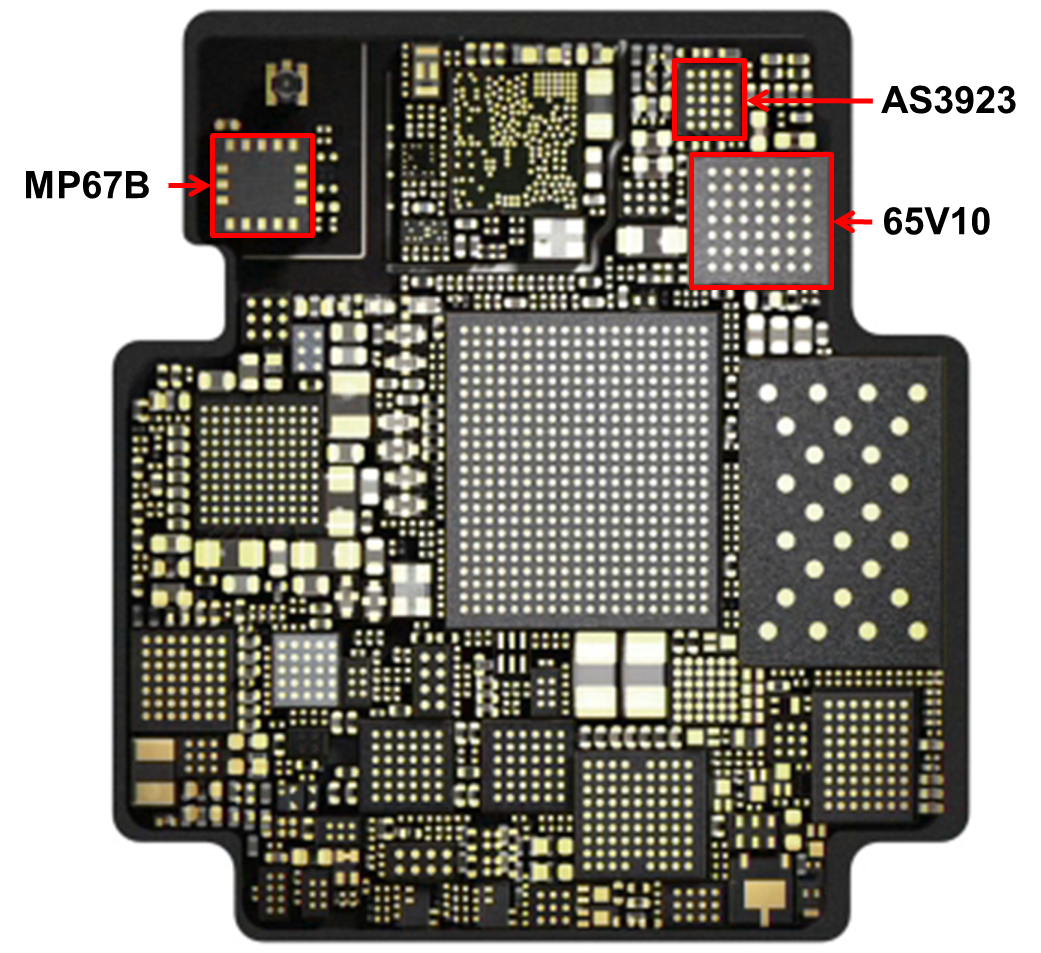 Come April 24 we will know what else is in there, as you can see that board is quite packed. In the meantime, we’ll be looking for some more recognizable components.

One thought on “Apple Watch Launch Confirms WiFi and NFC Inside”